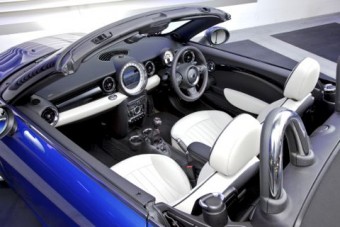 The two seater drop-top Roadster is the sixth model range for the BMW owned Mini range and it’s British built.

It is being produced alongside the Mini Hatch, Clubman estate, Convertible and two seater Coupé on which it is based.

The arrival of the new model sees the assembly plant on the outskirts of Oxford, the press shop in Swindon and the Hams Hall engine factory gain even further in importance.

Mini already ranks as the country’s third-largest carmaker, and the BMW Group is investing around £500 million in the ongoing expansion and modernisation of its manufacturing facilities in Britain up to 2014.

Last year Mini’s global sales were up 12 per cent to a record 285,000 units. With five of the six Mini models available built at the Oxford, the plant’s production is close to the current maximum of 200,000 cars a year.

With the on-going model range expansion around another 50,000 units a year can be produced to meet the ever increasing global demand, much of it from emerging new markets such as India, Nigeria, Armenia, Bolivia and Azerbaijan.

The fifth Mini model range is the Countryman SUV which is produced at the Steyr factory in Austria and an increase in production volume expected there.

The Roadster will not be the last new Mini model on the current range platform. A Mini Van, based on the Clubman estate will be launched this year and the Paceman Coupe SUV concept based on the Countryman is also destined for production said Dave Tuckett, product and planning manager for Mini UK.

He added, “With the arrival of the Roadster we now have 108 models in the Mini range but with our comprehensive option packs, options, colour and trim combinations we have calculated there are 15 billion possible spec combinations across the range. No wonder we say no two Minis are the same.”

Mini sales in the UK were a shade over 50,000 units last year, a 14 per cent increase over 2010 in an overall new car market which fell due to the economic climate by 4.4 per cent. Currently the Hatch remains the best selling Mini version in the UK taking 46 per cent of sales with the Countryman SUV the next most popular with 22 per cent.

Diesel model sales have increased by 60 per cent this year due to the introduction of the lower-taxed 99g/km variants. Currently diesel models account for 46 per cent of Mini sales in the UK.

Dave Tuckett said they estimate the new Roadster will attract between two to three thousand sales in the UK this year, around the same as the Coupe on which it is based, but considerably less than the 7,000 annual UK sales the four seater Mini Convertible achieves.

Prices range from £18,020 up to £24,860 plus of course there is the usual array of extra cost option packs and goodies available so that customers can personalise the model of their choice.

There are four engine options all with stop/start. Three are 1.6-litre petrol units plus there is a 2.0-litre turbodiesel unit on offer. The specification options mirror that of the hard-top two seater Coupe introduced last year with the 121bhp Cooper version, the turbo181bhp Cooper S, the turbocharged 208bhp John Cooper Works and the 141bhp Cooper SD turbodiesel. Cooper versions are expected to take 48 per cent of sales, Cooper S 33 per cent, SD diesel 15 per cent and the JCW 4 per cent.

There is a £1,085 six speed automatic transmission option available on all versions except the JCW model.

Ninety-five per cent of UK Roadster sales will be to retail buyers against the overall 70 per cent retail sales across the Mini range. At this stage it is not possible to say what the male to female sales split will be or indeed the age group of UK buyers.

The all important fuel consumption and CO2 figures range from 38.7mpg for the JCW version up to 62.8mpg for the SD diesel with the best selling naturally aspirated Cooper 1.6-litre petrol model being the cleanest petrol unit emitting 133g/km of CO2 so VED road tax is £120 and BIK company car tax 17 per cent.

Insurance ratings are 19 to 37E Still on the subject of speed the fabric roof can be raised or lowered in just 8.0 seconds, a good feature bearing in mind UK weather and this can be done at speeds up to 20mph.

Good news is that the canvas roof folds right down into the rear body of the car so it gives a nice clean body line and reasonably good rear visibility. Not like the pram-type folding roof of the Mini Convertible which sits proud of the body, looks terrible and blots out rear vision.

When it comes to optimising occupant protection the Mini Roadster is fitted with a pair of roll-over bars behind the seats, a safety feature yes – but they do restrict rear visibility. Whether the roof is open or closed, the driver and passenger have a 240-litre load compartment at their disposal and just enough room behind the seats for a carrier bag each. The wide through-loading facility into the passenger compartment provides an additional dose of practicality. The Roadster of course retains the premium image BMW has carefully crafted for it with a high-quality range of standard equipment.

This includes air conditioning for all versions, electrically adjustable exterior mirrors, Park Distance Control, height-adjustable seats and an audio system with MP3-compatible CD player and AUX IN connection. Levels of comfort and individuality can be further enhanced by specifying options such as xenon Adaptive Headlights, black headlight housing, Comfort Access and the Always Open Timer.

The Roadster also offers in-car use of infotainment and communications features and with Wi-Fi and iPhone specific applications and functions. It’s a pretty package, the car looks better balanced with the seemingly longer canvas roof than the bubble hard-top Coupe.

They both look sportier than other Mini versions because of the extra 13 degrees of swept back angle for the front A pillars.

Inside its Mini through and through. Roomy for two adults in the front with enough arm space – just, and enough legroom to slide the front seats right back for us long legged drivers and the headroom with the hood up was good even for six-footers. With the rain pelting down and the canvas roof up it was just like old roadster times, bygone days of Triumphs and MGs but with today’s powerful heaters, demisters and aircon enjoyment reigned, as opposed to rained.

When the rain stopped down went the roof. A quick manual un-doing of the centre manual catch and push the button to get the roof down and stowed in quick time. Repeat the process and the roof was raised almost without the April showers dampening our driving experience.

The roof does require a firm grip to lock it back into place though, mind the chipped finger nails ladies. As for performance, classic Mini, go-kart in the handling department, the steering seems even sharper and when manufacturers take roofs off hatchbacks there can be rigidity implications.

The Mini Roadster doesn’t suffer from the body tremors to a great extent; certainly the shell appears very stiff with its new strengthening cross-beam behind the seats. Push the car through tight corners and there was some wheel/suspension shake through the steering wheel. As always the smaller the wheels the better the ride comfort will be and the same applies to the new Roadster.

Driving the Cooper S with the all important must-have Chili Pack, the Roadster gets 17-inch wheels instead of the standard 16-inch ones. The ride is sportingly firm anyway but the added wheel size just compromises the suspension’s ability to soak up ripples and bumps in the tarmac at higher speeds and increases the road noise intrusion.

But Roadster drivers are traditionally hardy people and enjoy taking the rough with the smooth. The interior is of impeccable quality as usual, too many fiddly switches for us older people with less nimble fingers, but it is a classy piece of soft top motoring.

Unfortunately Mini didn’t have any of the best selling Cooper versions of the Roadster, price £18,020, at the press launch this week, only the £20,905 Cooper S and the £21,639 Cooper SD diesel versions.

But those prices are only the start because option packs, although not compulsory are expected, so both my test Roadster models had over £6,000 worth of extras, some being must-haves for better resale demand.

The swift 1.6-litre, 181bhp turbocharged Cooper S is always a delight of an engine to drive. Plenty of power, response and good on fuel, officially 47.1mpg for the Combined Cycle. On my spirited test drive over winding A and B Cotswold roads without any motorway cruising, the figure was 37.7mpg.

Given the performance with zero to 62mph taking 7.0 seconds and that was pretty acceptable. The top speed of 141mph was never an issue. UK customers will opt for the non turbocharged version of this engine with the Cooper version, just because of its lower price and to be honest with our road conditions and high fuel taxes we can live with a bit less speed and a bit more mpg.

The Cooper SD Roadster with its 2.0-litre, 141bhp turbodiesel unit will be an option for business owners rather than company car drivers.

Can you see any company car driver getting their fleet manager to sanction a two seater Mini Roadster as a company car? For the record top speed of this version is 132mph, zero to 62mpg takes 8.1 seconds, officially it will do 62.8mpg and on test it returned 48.9mpg.

Just as with other Mini models in the ever increasing range there is a Roadster version to suit soft-top enthusiasts and as the UK is the second largest market in Europe for convertibles of all makes, so the Mini Roadster’s sales success is assured.

Against: Firm ride and unsettled at times, fiddly switches, pricey when options are added.