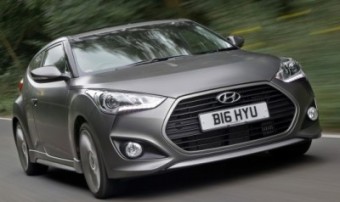 With two doors on one side and one on the other, the Hyundai Veloster always turned heads, and now its new high performance turbo-charged version will put them in a spin.

The turbocharged version of the Veloster 1+2 door coupe will be available in showrooms tomorrow from £21,995 and is the first to feature Hyundai’s 1.6-litre T-GDI engine with a high-compression, twin-scroll turbocharger.

To best suit European driving tastes and enhance driver enjoyment, power output has been boosted and low end torque increased so it develops 186PS and 265Nm of torque and is Hyundai Veloster Turbo SE has special bodywork and bigger rear wing mated to a standard six-speed manual transmission with wider gear ratios than the normally aspirated version. This gives 133 mph and acceleration from 0-62mph in 8.4 seconds with maximum torque between 1,500rpm and 4,500rpm and sports specification includes firmer dampers. The Veloster Turbo SE emits 157g/km CO2 and is claimed to give up to 40.9mpg on the combined cycle.

The front bumper, radiator grille and front fog lights are new to the Turbo and there’s a longer and wider rear spoiler with integrated LED brake light is included in the visual changes along with a red “Turbo” nameplate on the bottom right of the bootlid with a body kit along the sides as well as unique new 18-inch alloy wheels with chrome inserts.

Three colour options will be available for the Turbo SE namely White Crystal (Solid), Phantom Black (Pearl) and another Hyundai-first a Matt Grey finish. The Pearl and Matt Grey paints cost £445 and £525 respectively. A tilt and slide Panoramic sunroof is available for £950.

Inside, the Veloster Turbo SE has re-designed leather seats with grey panels, with the “Turbo” title embossed on the driver’s and passenger’s seats and the driver’s seat is electrically adjustable with lumbar support.

There is the familiar transferable 5 Year Triple Care assurance package.

Veloster product manager for Hyundai Motor UK, Paul Strong, said the unique 1+2 designed car was crying out for a power uplift to closer match its sporting coupe looks, and this was now available. 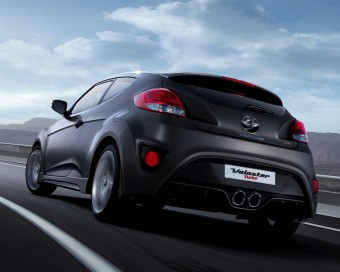 He said, “We wanted to give buyers a more powerful Veloster if they wanted it and it has always been in the plans to have this car in the UK but we wanted to launch earlier this year with the model which would have the wider appeal.”

The Veloster Turbo generates nearly 33pc more power and much more torque for mid-range overtaking but it also slips in beneath the significant 160gkm emissions mark.

It will be joined next year by a more basic Veloster Turbo at just under £20,000.

“We anticipate selling about 1,100 Veloster coupes this year,” added Mr Strong, “Our estimates are that between 10 and 20pc could be the Turbo and it could have particular appeal to the user-chooser business buyer.”

Closest rivals to it must be the Scirocco 1.4TSI and Astra GTC 1.6 VVT Turbo.

A very brief run in the latest Veloster Turbo quickly confirmed this is a car you could enjoy a lot.
The driving position is not only commanding but direct and the power feeds in smoothly but quickly with some lightness of the back end becoming apparent.

Driving with some restraint it grips well and responds faithfully to throttle, steering and brakes.

I liked the slickness of the gearbox and the wider ratios mean you are not having to make rapid changes up the box during acceleration, but the test car had a particularly long clutch travel with was annoying.

Ride quality has been tuned to be firmer for UK roads and it bumped over some pieces of tarmac but it always let you know how it was coping through the amount of road and suspension noise produced under the Veloster Turbos wheels.

Without properly trying it brim to brim it would be impossible to accurately gauge fuel consumption but I estimated it to be about 37mpg, which means it would be a good long range tourer if you did not need a lot of interior room or luggage space.

No doubt a steady run along motorways and main roads would keep down engine and road noise as well.

I think this is going to become one of those much sought after, future classics, which will bring a timeless smile to a driver’s face.