You are here: Home / Featured / Executive motoring: BMW 240i Coupe 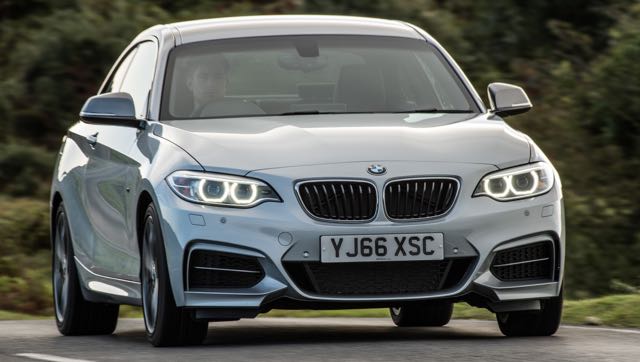 At their annual end of year UK automotive media briefing BMW released images of their new 5 Series Saloon and Touring estate ranges which will be in the UK from February next year.

Although not their largest selling model ranges the 5 Series accounts for one out of every four Euros the company makes. In the UK the 5 Series sells in the region of 15,000 units a year.

Other news released; BMW’s global sales for the year-to-date are close to 1.5 million vehicles, an increase of 6% over the same period last year. In the UK, the fourth largest global market for BMW after the USA, China, and Germany, sales for the first nine months of this year were up by 11.5% at 138,656 units.

Whilst the UK is not the top selling market overall it is for ‘M’ hard-core performance models and for M Sport specification derivatives which account for 50% of all BMW models sold in the UK.   BMW use M for their outright performance versions, the M Performance classification covers drivetrain and chassis enhancements and M Sport covers design and specification aspects.

The 2017 model year changes include the introduction of new 2.0-litre, four cylinder TwinPower Turbo petrol engines for the 1 Series Sports Hatch and 2 Series Coupe and Convertible ranges. These twin-scroll turbocharger engines are the 20i, 25i and 30i delivering between 6hp and 7hp more than the previous units. They are now 184hp, 224hp and 252hp respectively. Fuel economy is improved and CO2 emissions by up to 17g/km with reductions in VED road tax and Benefit-in-Kind company car tax. Prices start at £23,980 for the 1 Series, £26,865 for the 2 Series Coupe and £29,830 for the 2 Series Convertible.

The 2017 1 Series three and five door Hatchback models and the 2 Series Coupe and Convertible models now have new M Performance models in their line-ups. They replace the M135i and M235i variants. Now designated M140i and M240i these are powered by a new 3.0-litre straight six petrol engine with TwinPower turbo technology. They provide an increase of 14hp and 50Nm of torque delivering a maximum 340hp and 500Nm improving acceleration time with even better engine response. Top speed for all versions is limited to 150mph and the zero to 62mph time is 4.8-seconds for the M140i and M240i and 4.9 seconds for the M240i Convertible. Fuel economy ranges from 36.2 to 34mpg and CO2 emissions of 179 to 189g/km drop VED road tax by one band. Prices are carry-over from the M135i and M235i versions with the M140i Hatchbacks starting at £31,875, the M240i Coupe at £35,090 and the Convertible at £38,535.

BMW have also improved the real-life driving range of their i3 plug-in electric and REX range extender models with a 94Ah battery pack which has 50% more power capacity. Officially the plug-in version will cover up to 195 miles after a full charge which BMW says for most users will be in real-life driving conditions around 125 miles. The REX version will officially cover 93 miles on only battery power but more likely 81 miles in real life. But with battery and the petrol range extender generator the range is 243 miles. A DC rapid charge will take 40 minutes for an 80% top-up but using a standard 13 amp power socket a full charge can take up to 10 hours. Other changes to the i3 models include upgrades to the standard equipment. BMW i3 prices are £27,830 and the REX range extender version costs £30,980 after the £4,500 Plug-In Grant has been applied.

i Technology plug-in-hybrid models, the 740e and 740Le xDrive variants with prices starting from £68,330. Using a 2.0-litre petrol engine and electric motor fully integrated into the eight-speed automatic transmission, total power output is 258hp and 500Nm of torque. This gives an electric power only driving distance of 29 miles for the standard wheelbase model and up to 27 miles for the Le xDrive long wheelbase variant. CO2 emissions are 49 and 54g/km respectively. Officially fuel consumption is 134.5mpg and 117.7mpg for the Le xDrive model.

BMW also announced improvements to their Connected Drive in-car communication technologies. Over 600,000 BMWs on the road in the UK now have a built-in SIM card. Six additional models now receive the latest iDrive interface and connectivity services. It is now available for the 1, 2, 3, 4 Series, X5 and X6 ranges.

If the hard-core M2 Coupe with 370hp and 500Nm is too manic in performance for your taste, too aggressive in its styling and too expensive for your pocket at prices from £44,080, the new M Performance M240i Coupe could be a very good option.

A new 3.0-litre, straight six TwinPower 340hp twin-scroll turbocharged petrol engine has the same torque of 500Nm and the price is a more agreeable £35,090 and the insurance costs should be a little cheaper as well. Top speed is still limited to 155mph with the zero to 62mph acceleration time of 4.8-seconds for the manual or 4.6-seconds for the twin-clutch auto.

The official combined Cycle fuel economy figure is 36.2mpg for the manual version and 39.8mpg for the auto and on my brief but swift test drive around the Berkshire winding roads in a manual gearbox test car the real-life figure was 26.2mpg. No doubt a motorway cruise will improve on that. The CO2 emissions of 179g/km means VED road tax for the First Year rate is £355 reducing to £230 for following years. Company car drivers, if they are lucky to have one, will pay 32% Benefit-in-Kind tax.

Whilst on the subject of costs one addition to the specification I would recommend is taking the Adaptive Sport suspension at £515. This lets the driver tweak the ride compliance from Comfort to Sport modes which is desirable depending on the type of road and the state of a driver’s enthusiasm on a day-to-day basis. 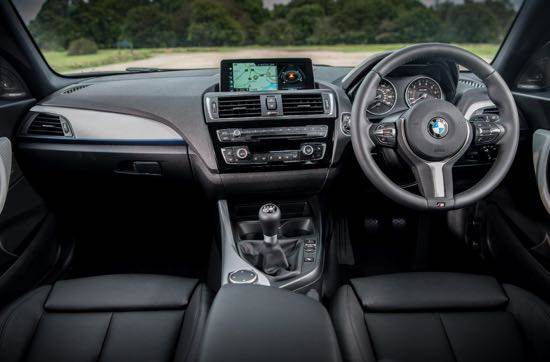 There are a host of other extra cost options, everything from parking distance control at £520 to a media package including sat-nav, real time traffic info and remote services at £900 to a must-have reversing camera at £330 which helps rear visibility limited by the two door Coupe body design.

Outwardly the M240i Coupe doesn’t look much different to the standard 2 Series Coupe. It has curves and sculptured styling lines but it doesn’t have the aggressive low stance of the M2 or the bulbous wheelarches or the complicated blades in the lower front bumper directing air-flow under, through and around the car. In many ways that could be a good thing; you can drive unnoticed, you don’t get troubled by ‘green-eyed’ go-faster jockeys in visually hot looking cars wanting a race and you won’t upset your fellow company car users who might not appreciate your higher rung position up the company car ladder.

If you can live with the reserved styling the driving experience is certainly not reserved or shy in any way when the mood takes you. There are no body or suspension changes for the 240i Coupe but the Convertible has some strengthening within the shell and suspension as does the M140i Hatchbacks.   The ride is compliant for a sports machine and the balance of the Coupe impressive as it allows you to enjoy the rear wheel drive configuration during cornering in a consistent and safe way.

The engine feels more eager to please over the outgoing 235i unit with that extra 50Nm of torque allowing it to be more responsive at lower speeds. Unlike the M2 this version is quite happy to be driven at low speeds in traffic or on country lanes and of course there is 340hp on tap when the road clears if you are in that sort of mood. 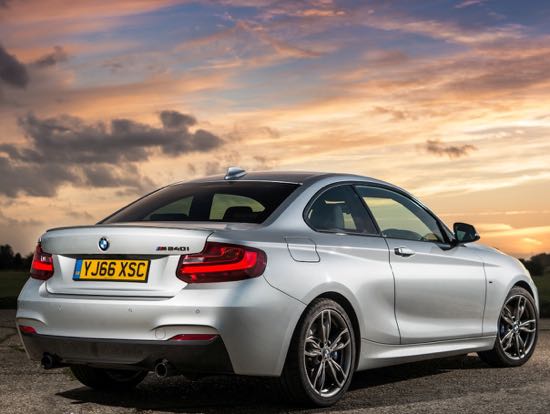 The six-speed manual gearbox has what BMW calls ‘an engagement control function’. This actually blips the throttle on downshifts for increased smoothness and it sounds good as well.

The soundtrack isn’t as glorious as the M2 but neither is it feeble.

All in all the M240i is a modest improvement enjoying more power at the same price but I just wish they had at least tweaked the styling to make it look less of a standard 2 Series Coupe.

For: Over £10k cheaper than a M2 with almost as much performance, compact, agile handling, a joy to drive in all traffic conditions, classy high quality interior.

Against: Subdued exterior styling looks like a standard 2 Series Coupe so it doesn’t reflect this car’s bright ‘M’ performance, watch the cost when adding those must-have options.