You are here: Home / Motorsport / Elfyn’s inspired fight for the future 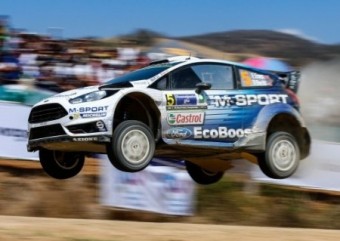 Team mate Ott Tänak had been on course for a podium finish until an issue with the transmission dropped him outside the top-ten on Saturday afternoon.

Rally Italia is an event that demands respect, and that is something that Evans and co-driver Daniel Barritt fully understand. It is one thing to be fast in Sardinia, but it is quite another to be clever and a purely flat-out approach rarely reaps the rewards.

Evans always competes with an air of intelligence in his driving and that faired him well this weekend. The Welshman may have lost more than three minutes to the leaders with a driveshaft issue on Friday morning, but he stormed through the field and quickly broke back into the top-five.

The Welshman admitted that the rhythm he had enjoyed at the start of the season had not fully returned, but the future is looking promising for Evans who is becoming stronger ahead of his more favoured events.

Elfyn said afterwards, “It’s a very unexpected result after the issues we had on Friday.

“It’s fair to say that we had a difficult start for various reasons. Obviously we had the issue with the driveshaft on Friday morning and then after that I just couldn’t seem to get into the flow of it.

“We needed to start again on Saturday and I think it was a fairly solid run. We didn’t take any risks or chances but had a good rhythm which was a nice change from the day before! By the end of the day our fifth place was secured and when Mads Østberg encountered problems we moved up another place today.

“It’s been a difficult couple of rallies, but the feeling is gradually coming back and I’m sure we’ll be back on it in Poland. It’s a fast rally so it could be a bit of a shock to the system, but hopefully we can get up to speed and have a good run.”

Rally Italia was won by Sebastien Ogier in his VW Polo with the Hyundai i20 cars of Hayden Paddon and Thierrry Neuville behind and ahead of Elfyn.